A number of different NPC's have been added to "please be nice :(" aside from typical enemies.

Love Birds spawn in a flock on every level and follow the player. They do no damage, but they can be killed by player weapons and enemies. Birds will stop player bullets, and killing a bird causes an 8-point penalty to the player's Morality score.

Because they intercept bullets, birds may be treated as a hazard (especially when using explosive ammo types such as the RPG). Love Birds are affected by the Vortex Gun.

There are 9 different Love Bird sprites. 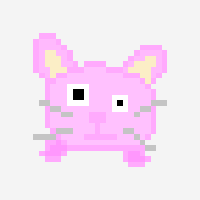 Explosive bunnies were added in v35, they move towards the player like birds do, but when coming into contact with the player they will multiply, upon death they will explode and take down walls.

Bunnies can be cloned on purpose , dragged away with the vortex gun and then detonated using the spacebar.

A bunny explosion also kill other bunnies,causing chain reaction, if a big bunny horde has been formed, make sure to take a good distance if you plan to detonate using a bullet.

Community content is available under CC-BY-SA unless otherwise noted.
Advertisement